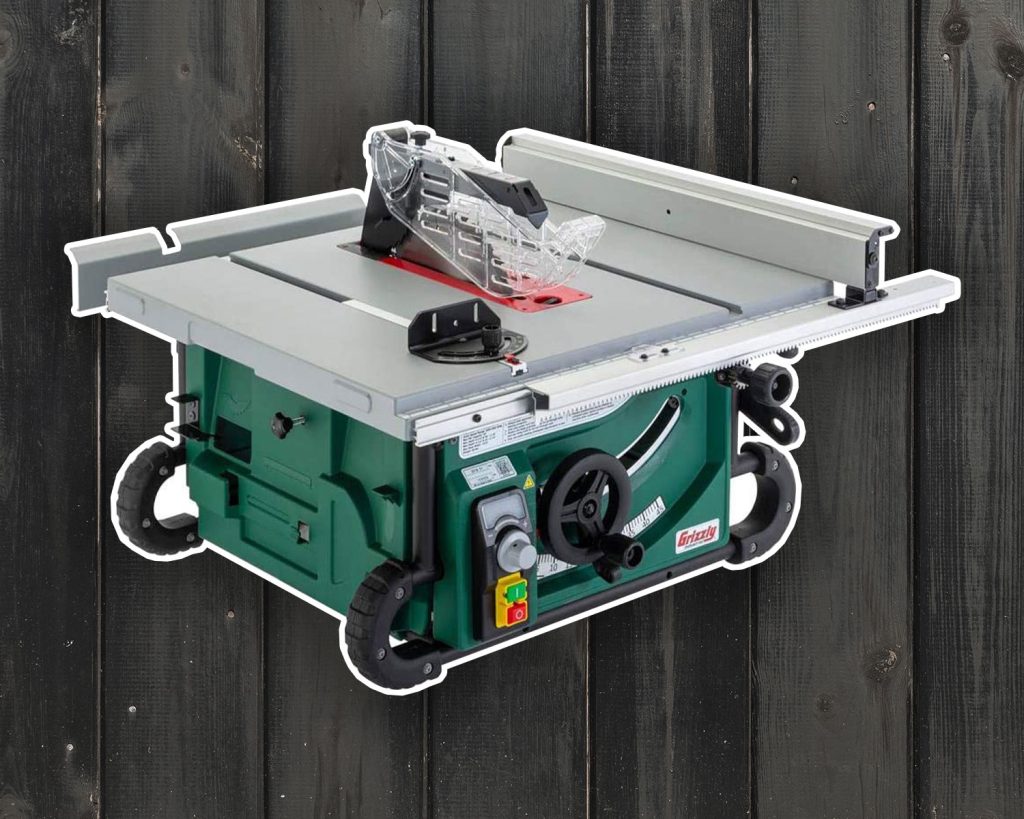 The Grizzly Industrial G0869 bench top table saw is designed to be portable and usable for both home and the job site. There are some neat features on this saw, but there are also some drawbacks. Let’s take a closer look.

This saw offers a good amount of cutting power and it can easily rip thinner materials. There is some mixed feedback on whether or not it’s consistently great at cutting harder or thicker materials.

The motor has a soft start feature so it won’t overdraw power when it fires up.

The 15 amp motor is rated at 2 HP and has a variable speed design. The max speed is 4000 RPM and it’s variable from 2000 to 4000 RPM with a knob near the power buttons. You can adjust the speed while it’s running with the knob, but it doesn’t show you exactly what speed it’s running at. This has confused some people since they aren’t able to understand if they should be going with a lower or higher RPM for cuts, and many just leave it at the highest RPM setting.

There are some people that say they’ve had no problems cutting harder woods or thicker materials, and there’s also some that say the saw felt bogged down while making tougher cuts or the saw even powered off (as a safety feature) during harder cuts. It could be misuse of the variable speed settings, or lack of good blades as well, but something to be aware of.

Overall, there are enough people happy with the power of this saw that it’s worth trying out if you like the Grizzly brand.

The cutting table on this saw is average in size for a portable table saw and offers a good amount of surface to work with. The table is made from aluminum. The table dimensions are 26-3/8 inch by 22 inch. There is a table support extension to help with support of larger materials. When you add the table extensions the overall dimensions increase to 26-3/8 inch by 32-1/4 inch.

Most people have a flat, smooth cutting table out of the box but there’s also people that find their table isn’t flat due to shipping damage or quality control, so it’s worth checking right away when setting up the table. Those that have warped tables have noticed it when they found their blade wasn’t squaring up to the table or just by laying materials or a square on the table.

There is a plastic throat plate that is easily installed and removed without tools, making it easy to do configuration changes with the blade. 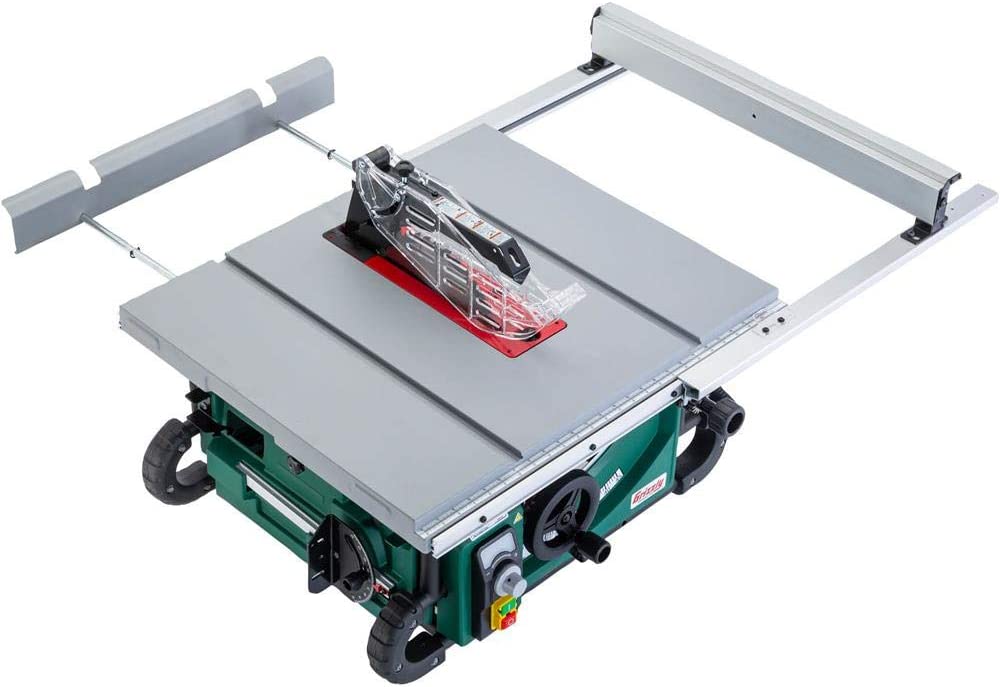 The rip fence on this saw is of the rack and pinion type and it works great. People who use this saw like how smoothly it adjusts and once it’s properly calibrated it’s easy to make quick and accurate adjustments. There is a flip-down piece that also helps you get a little close to the blade for thinner cuts. The rip fence also can be removed and stored right on the saw frame when not in use. 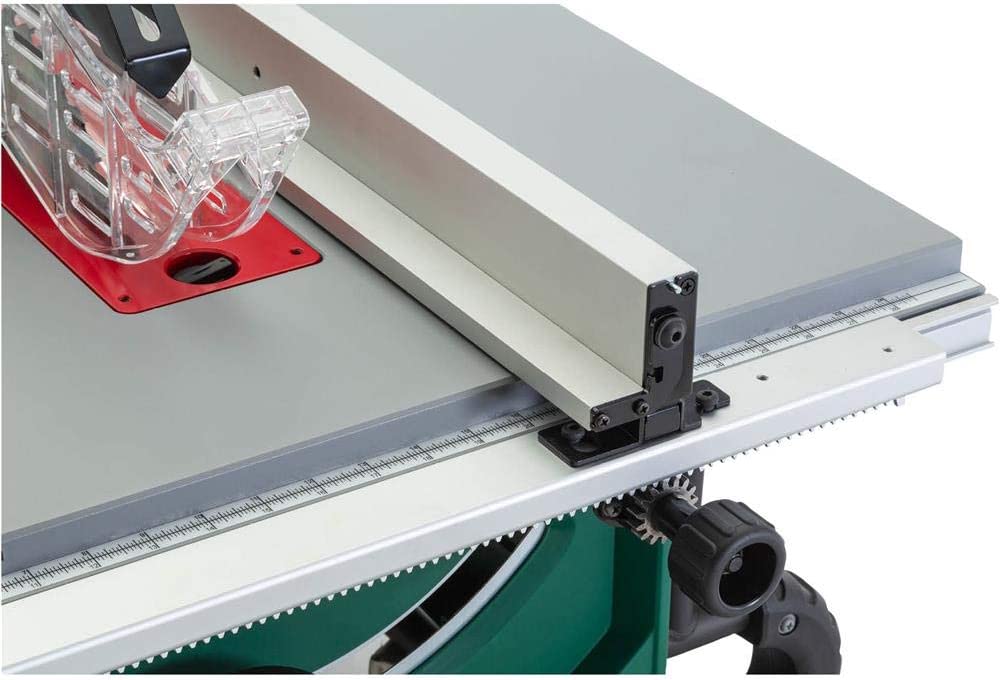 The blade height and bevel can be adjusted on this saw. The blade can be tilted from 0 to 45 degrees and has stops for quick adjustments. The blade has a max height of 3-1/8 inch at 90 degrees and 2-1/4 inch at 45 degrees. This is enough to rip 2x materials but it might not be enough for other demands.

People really like how smoothly the blade height adjustment is on this saw and it has a smooth action. Some people have run into issues with the blades being properly aligned out of the box so make sure to go through the proper setup and check everything. Sometimes the blade alignment issues were a result of a warped or slightly bent table as well, so be sure to check that if you run into alignment issues.

This saw employs a standard 2.5 inch dust collection port and it works pretty well to keep dust from building up on this saw. It works even better when hooked up to a vacuum system, so that is generally recommended if you have the means. 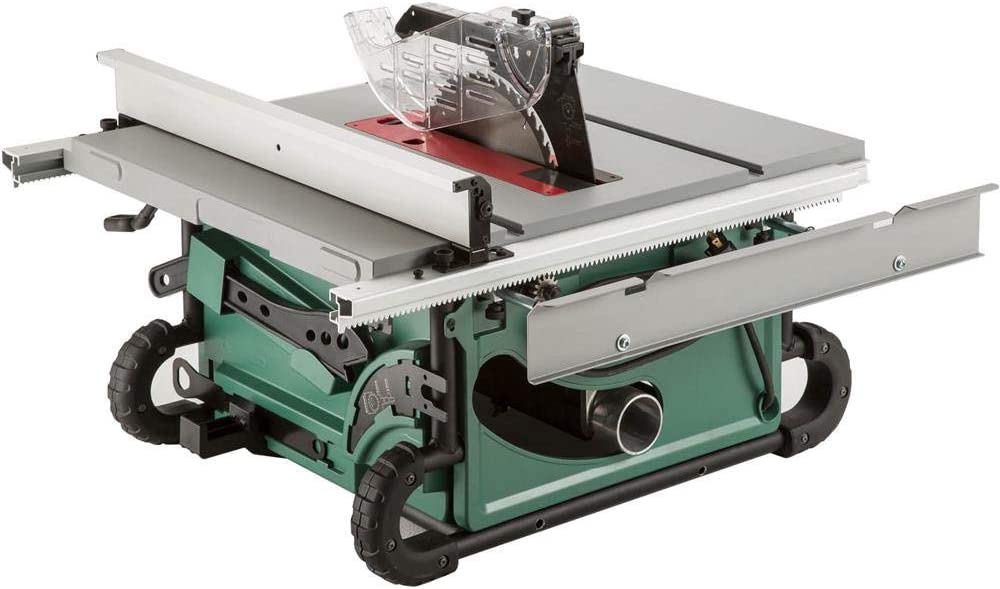 This saw has typical safety features and is a safe saw to use. There is a blade guard system to keep things from coming into contact with the blade accidentally. The riving knife keeps materials from pinching on the blade. The anti-kickback pawls will help keep kickbacks from occurring if something gets jammed or misaligned. There is a safe restart feature on the power switch to keep the saw from turning back on automatically if power is cut unexpectedly. 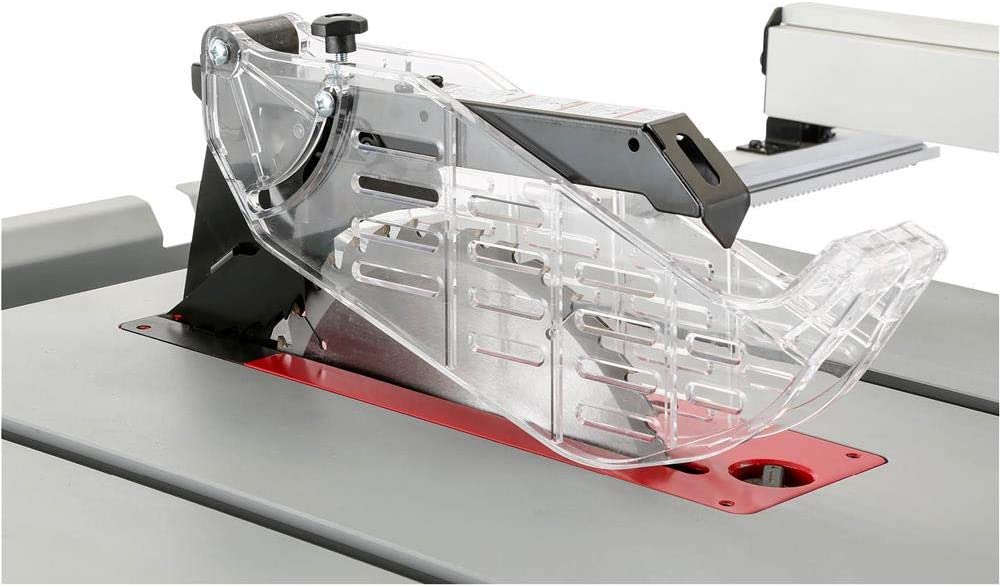 The build quality of this saw is overall pretty solid but as usual there’s a good amount of plastic parts used for levers, switches and knobs. The green housing is also plastic. It also helps keep the weight and price down though too, so it’s a tradeoff in the end. The parts that are plastic do break on people from time to time when over stressed, so it’s best to not get too rough until you know what it can handle.

People that get a good quality controlled unit out of the box are pretty happy with the overall quality of their saw and find it to stand up to a good amount of use. Most quality issues seem to arise from damage during shipping. During setup, make sure to inspect the table and rip fence for any warping or damage. 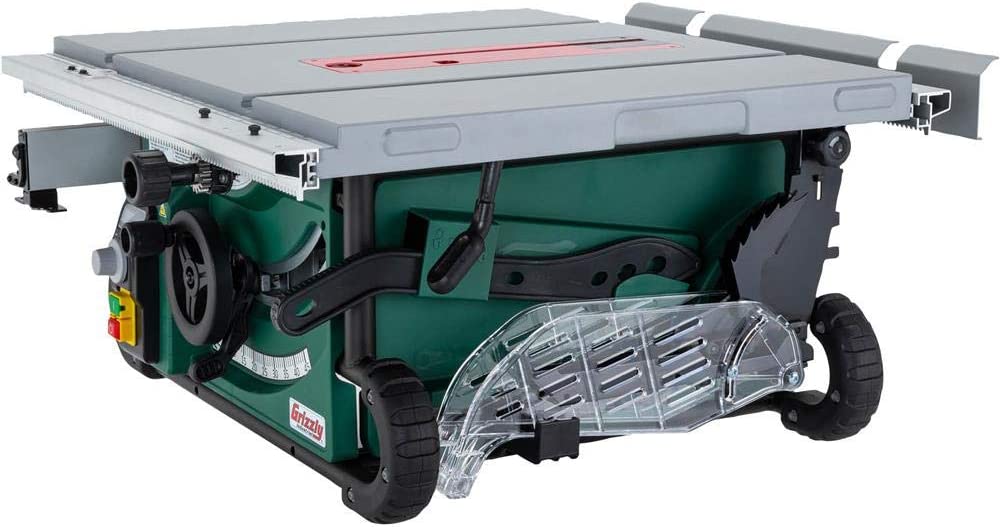 This is designed to be a portable table saw and it weighs about 60 lbs. It isn’t designed with a carry handle, but can be moved around by one able-bodied person. 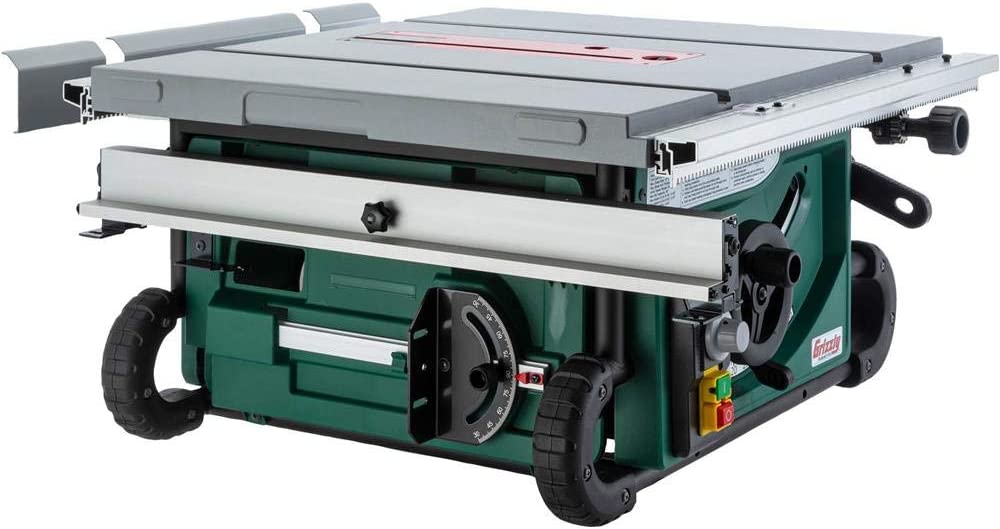 Dado blades will work on this saw and the maximum size that will fit is 13/16 inch. People have had good luck using this to make dado cuts and blade changes are pretty straightforward on this saw, so if that is something you require this saw could be a good option.

The part number for the dado insert from Grizzly is T30542.

This saw includes the typical accessories you’d expect. The saw is also designed to store all of it’s accessories on board, which is great.

The manual also outlines that you will need a 13mm wrench or socket, a 3mm hex wrench and a straightedge to complete the setup – all of which aren’t included with this saw.

Setup of this saw isn’t too bad, it will take more time if you included the stand, which also has a lot of parts to put together. The manual does a good job of showing what to do during setup.

People have had issues with things not being properly aligned out of the box so it’s important to include alignment checks in all of your setup. Also make sure to check if the table is warped or bent if you have any issues getting the blade to properly square with the table.

Here’s a quick video from Grizzly that shows the basics, giving you a decent idea of what to expect.

Grizzly offers a 1 year warranty on defective parts or workmanship. This is good enough to help you out if you have quality control issues in that first year of use, but it’s shorter than some other competing manufacturers.

The Grizzly Industrial G0869 table saw is a decent option for a portable unit and it’s unique feature is the variable arbor speed which can be adjusted between 2000-4000 RPM. This saw also offers enough cutting capacity for 2×4 or 4×8 sheets of materials. Some people have issues with the motor cutting out during cuts so that is something to consider. People that have good luck with this saw really like it and find it to be a useful, portable option for their tool lineup. 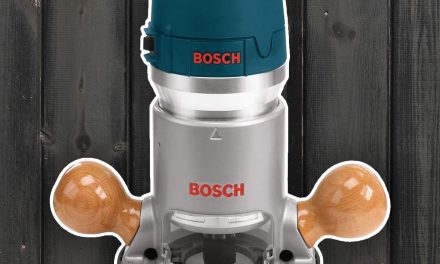 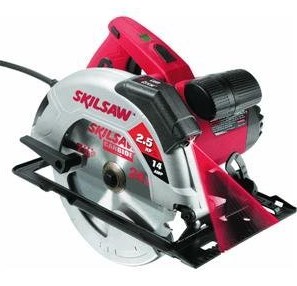 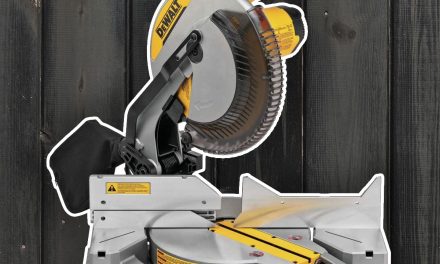