The DeWalt DW618PK variable speed router would be a good addition to any woodworker, contractor, or do-it-yourself home owner’s workshop. It can be used for trimming, cutting grooves, chamfering, edging, and more. It is sturdy enough to smoothly route through the toughest hardwoods, yet light enough (the entire kit weighs 22.4 pounds) to be put in a case and be transported from place to place. 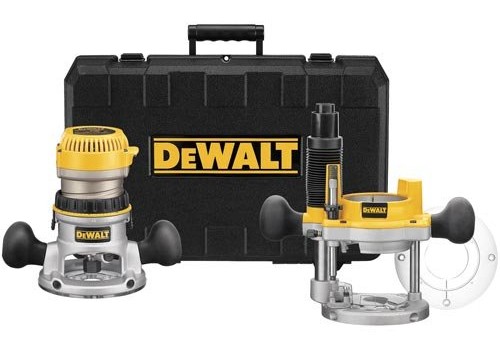 The DeWalt DW618PK comes with professional features such as a soft start motor and a variable speed trigger that helps to make routing smoother and easier. In addition, it has the power to maintain constant speeds in tough situations.

“After having this router for about two months now I have been able to completely shop-test it. I recommend this router system to anyone who is looking for a router.” – Justin Dennis

“This is a relatively new router system, and I concur with the initial good press it has received. The motor transfers easily between the bases, the smooth start is pleasant and non-jarring, and the motor is relatively quiet.” – P. Fiorino

Well over 50 percent of online reviewers raved about the DeWalt DW618PK and gave it the highest possible rating. They frequently commented on the router’s superior ergonomic design and easy to handle characteristics. Quite a few reviewers mentioned that the router was smooth, powerful, well-balanced, and that depth adjustment levers were easy to use.

While the vast majority of the reviews were positive, there were a few reviewers that gave the DeWalt DW618PK a poor rating. Most of those who posted poor reviews mentioned that their routers broke down after limited use or that the plug attachments were not up to par.

The DeWalt DW618PK router received extremely high ratings. Most reviewers recommended this router and felt that it was smooth, powerful, well designed and convenient to use. Contractors, woodworkers, and do-it-yourself homeowners also commented on the router’s quality and versatility.

The only complaints about the routers came from owners whose routers broke down after limited use. Overall the complaints were few, and most of those that reviewed the DeWalt DW618PK router felt that it was a high quality tool and an excellent value in which could definitely be recommend.