When you buy a modern, portable table saw, you may be overwhelmed by some of the options at first. It won’t take long to clear the fog, though, and get a better understanding of what to look for and compare. Just read through this guide to see what things you should look at when buying a portable table saw.

The Skilsaw SPT70WT table saw is powered by a Worm Drive motor, which is the same type of motor that powers the legendary Skilsaw circular saws. This type of motor is noted as delivering more power than a typical motor in other types of table saws.

Dados – Some of the saws can accommodate stack dado blade sets. These saws will usually state in their specs that it can handle dado blades, and will usually require that you purchase and additional dado insert with an opening sized for a dado blade.

All of the saws that we cover have a minimum blade height of 3 ⅛ inch. This seems to be the minimum standard, and we wouldn’t recommend getting a saw with anything less than that. A couple of the saws, as mentioned before, go a little higher:

A good portable table saw will also have adjustable blade heights, as all of the ones that we cover do. All of these saws also have blade tilt up to a 45 degree angle. This is something that you should look at for any table saw you might buy.

All portable table saws will need some sort of adjustment or alignment before first use. It is important to read the manual and see what the manufacturer requires you to adjust. They will also show you how to adjust it. Don’t gloss over anything during setup and adjustment phase, as safety can be affected by overlooking something important.

Here are a couple tools that can be helpful in tuning a table saw: 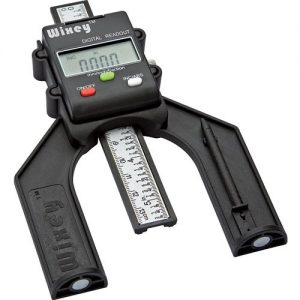 The smaller saws with the smaller rip capacity are usually the ones designed to be more portable and carried in one hand. It’s the heavier saws that come with rolling stands that typically have the larger rip capacity.

Be sure to consider how large the materials are that you will be cutting with your saw to help determine how big of a rip capacity you might need on your saw.

The type of rip fence also will vary with each manufacturer. Most rip fences are sufficient on the portable table saws out there, with some having a reputation for being more finicky.

Dewalt has the best feedback on rip fences. People really like the rack and pinion design of their rip fences and find them easy to use and easy to set properly.

Feedback is mixed on Bocsh and other other brands. Users find Bosch SquareLock rip fences to lock into place nicely and accurately, but some say they are tricky to move.

Most manufacturers use some sort of table surface that will minimize friction when moving materials across the table of the saw.

Users of Dewalt table saws say that the coating that is used on their saws seems to start to come off after it gets scuffed up. This doesn’t affect usability but is an annoyance.

The weight of the portable table saws that we look at ranges from 45 pounds all the way up to 110 pounds. The lightest and heaviest both being Dewalt saws.

There seems to be a pretty clear division in weights. The lightest of the saws usually have the open-frame design with a tube frame or base. Those types of table saws weight anywhere from 45 to 70 pounds, the Bosch GTS1031 being the heaviest and the Dewalt DW745 and the Skilsaw SPT70WT being the lightest. The heaviest is the Dewalt DW7491-RS at 110 pounds.

The heavier saws are the ones that seem to come packages with stands. The saws typically mount or attach to the stands. Most of the rolling stands have a folding feature to fold the stand with the saw still attached, and to allow vertical storage.

A heavier saw is really only more inconvenient in that you will need the room to also allow for the attached stands to move them around. The smaller saws can just be picked up and carried rather than pushed on a stand. Some portable table saws are small enough to be easily carried by one person.

Look for saws that are designed to have tool free adjustments. Tools that are easy to adjust will save you time and allow you to be more efficient while at work.

Some of the newer saws pay attention to convenience and provide onboard storage for accessories and parts. This is a good thing to look out for.

Let’s face it, table saws are very dangerous tools. You need to use safe practices when using them. Luckily modern saws also have some nice safety features. There are several safety features you will encounter when looking at portable table saws. Not all saws have the same features, but some will seem pretty common.

The blade guard is a pretty common feature on most portable table saws. The blade guard simply sits over the blade and is designed to allow materials to move underneath it during the cuts. It’s purpose is to keep the saw blade from being an open blade. Some people will say that blade guards interfere with making good cuts, for various reasons, but the safety benefits should not be ignored.

This is an easy one, and most table saws come with some sort of a push stick. These are also super simple to make with a piece of wood.

Push sticks allow you to push the wood without having to get your hands down close to the blade, which can be a good safety precaution to use.

The SawStop technology is neat in that it works to stop the blade and pull it under the table if the saw detects contact with human flesh. It actually works quite well, check this video out for a demo.

Bosch uses something similar in a new saw they are putting out, the Bosch GTS1041A-09 REAXX portable table saw. This saw also detects human flesh and stops the blade, pulling it out of the way in the case of an accident.

This type of technology is likely the future of table saws. Safety features will likely be an area where we see things change in an interesting way in table saws and other power tools as we move forward.

Most portable table saws have a dust collection port of some sort. You can usually hook up either a collection bag or hose to these ports. A shop vac can also be connected to many of the ports if they are in the 2 ⅛ inch to 2 ½ inch size range.

It seems that all portable table saws come with a stand or have a stand option from the manufacturer.

Bosch has the Gravity-Rise stand, which comes with the 4100-09 and can also be purchased separately. This stand is designed to take the effort out of raising and lowering the saw.

Dewalt also has a wheeled stand, which comes standard with their biggest portable table saw, the DWE7491RS. Some people state that they actually like the Dewalt wheeled stand more than the Gravity-Rise stand due to the wheels being a little more substantial and less susceptible to going flat on the job site.

The Dewalt DWE7490X and DWE7480XA both come with Dewalt folding stands.

Makita’s portable table saw also has a wheeled stand option, which is good due to it’s size.

The smaller saws don’t come with stands, but can mount on their manufacturers respective stands.

Be sure to take a look at what stand options are available for the saw that you are sizing up, and make sure that the saw you want can mount on the stand you want.

All table saws come with a pretty standard set of accessories. There isn’t much variation here except in safety features.

In the safety category, check to see if the saw comes with features such as a riving knife, anti-kickback pawls and a blade guard. Those are almost standard these days.

A push stick usually also comes with most saws. This is probably the least important though as a push stick is easy to make.

All portable table saws will also come with a miter gauge of some sort. The miter gauges that come packaged with most saws don’t usually get good user feedback, and the miter gauge is usually an area that can benefit greatly from an upgrade right away.

Table saws don’t always come with the greatest blade out-of-the-box either. But sometimes they do. Make sure to take a look at the blade that comes with your saw and evaluate whether or not it’s going to make the cut. Do several test cuts to try it out. Don’t hesitate to upgrade the blade right away, as this is an easy area to add more bite to your saw.

There is a pretty clear division in pricing when looking at the portable table saws on the market. Of the saws that we cover here, we could make three groups for pricing. Prices vary so don’t quote us exactly here.

Warranties for most power tools are at least 1 year. For portable table saws it’s no different. Most of these saws that we cover, as well as most others out there, will have a 1 year warranty.

Some manufacturers offer longer warranties, however. Dewalt is known for their 3 year warranty, which many people find attractive. All of the Dewalt saws come with a 3 year warranty.

Keep the warranty length in mind when considering what type of support you want to have for your saw. Most of the time, 1 year is sufficient to work out any bugs with normal use of the saw.

Hopefully that helps to make a little sense of the portable table saw market. There really are a lot of good saws from a lot of solid manufacturers out there. A lot of them have very similar features, but some have unique offerings.

As a follow-up to this guide, read about the best portable table saws to see what’s the latest and greatest. We also have a comparison chart that compares specs on the table saws that we list as the best.